Four years ago today, I woke up.

It happened in Guadalupe Mountains National Park, at the top of Guadalupe Peak, in the far western corner of Texas. I was passing from Illinois to California to participate in a flaky internship for the X PRIZE Foundation that turned out to be a good thing after all. I don't remember why I chose GMNP as a place to stop. I had never heard of it before. It's not as popular as Carlsbad Caverns National Park, which is only 30 miles north on US-180/US-62. It's not as striking at Big Bend National Park, five hours' drive to the south, where I stayed the previous two nights.

How is not important. The point is this: watching the sun rise from Guadalupe Peak was important. 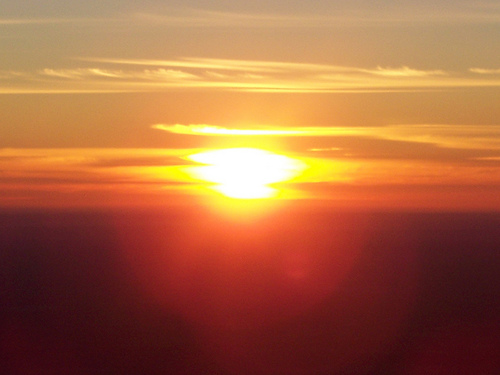 Now, I'm not sure how to describe the experience without sounding flaky myself. And really, I don't care.

28 January 2005 was my first day experiencing the desert. I remember this. I remember the feeling hitting me on the stretch of TX-54 north of Van Horn, Texas. I had spent the previous two nights in Big Bend National Park, which is even more dessicated and isolated, but it was different; the first night I dealt with rain, the next day was rain and hail. A desert earns its reputation from being a dry, damned place. The experience is lost when you're soaked.

On the 28th, I drove north from Big Bend to GMNP, up TX-118 to Alpine, US-90 to Van Horn, TX-54 north to US-62/US-180, which takes you right around the base of El Capitan. I remember the feeling of finally seeing the desert. I had been surrounded by it, but didn't see it until then. 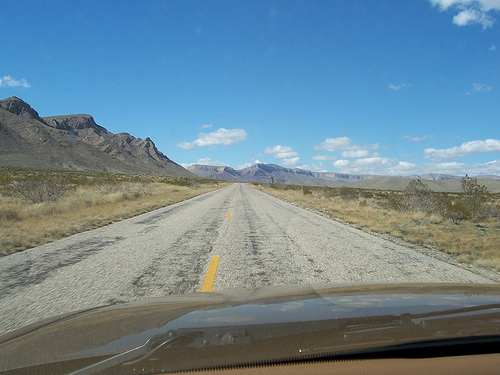 How do you miss something so big, so vast? I missed it because I was someplace else. On TX-54 my thoughts snapped back into place.

When I arrived at the park, I stopped at the visitors center to pick up a GMNP patch. Here I did something I don't normally do: I asked the guy behind the desk, an older volunteer, what he would suggest that I see in only one day. I don't like to ask for directions or suggestions. I like to wander in slowly opening concentric rings before blasting outwards. Call it luck that I opened up to the park volunteer when I did. He told me to wake up early, around midnight, hike to the summit of Guadalupe Peak in the dark, and watch the sun rise.

Where is he now? I don't know. Thank you, wherever you are, whoever you are.

Early the next morning, 29 January 2005, I woke up late, sometime around 3:30am. It was difficult to sleep the night before. The wind coming down from the mountain into the campsite was incredible. Never before -- and never since -- have I ever had to load the inside of my tent with rocks to keep it on the ground. That's how it was. The nylon sides fwap-fwap-fwapped constantly, loudly, pushing in and down to slap my face.

I was up and out, dressed and laced, a bit after 4am. The moon was high in the sky. With eyes adjusted for the night, the moon provided enough light to walk the strange trail without a flashlight. (I still packed a flashlight, a Mini Maglite, which I used once when I lost my nerve while walking through a stand of trees.) Some of the details I remember from this hike: I had two foils of cherry Pop-Tarts, one of which I opened after signing in at the base registry; I had two granola bars, Oreos, water; I had a wool blanket; I had my Moleskine and camera.

There isn't much to say about the trail in the dark except to acknowledge the wind; rather, THE WIND. Hiking in the dark is strange. You are aware of the rocks underfoot, the general layout of the terrain, and the looming feel of the rest of the mountains across the canyon. You can't see any of it, though. The outline of the landscape is there, but it's more of a presence than an image. Without a clear view of what's ahead, the remaining distance is a mystery as well. It is an alternate universe in which you can feel yourself straining but you can't know where the effort is taking you.

At some point the world starts to change -- so slowly that at first you don't notice it, and then when you do notice it you're not sure if it's an effect of the exertion or if it's real. In order to beat the sun to the top, I had to finish a 4.2 mile long, 3000-foot-plus elevation gain in about two hours. In the dark. In strange country. Et cetera. The approaching sun is something you feel long before you see it. 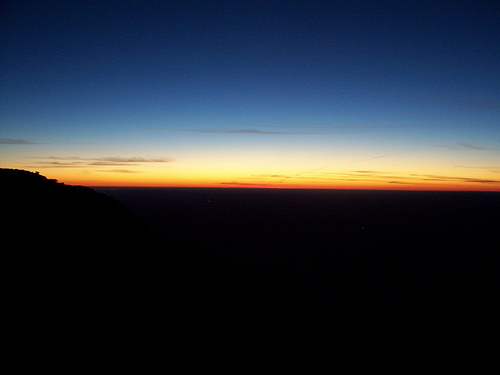 From here, it was almost a run to the top. I had no idea how much distance remained, but I wasn't going to lose to the sun. I was moving fast, rounding a turn on the smooth white limestone, and there was a sign, one-way, Guadalupe Peak to the left, no distance indicated. I followed the sign and just a few steps later there was the peak and its summit marker, a monument oblivious to how astonishingly weird it is in its surroundings. 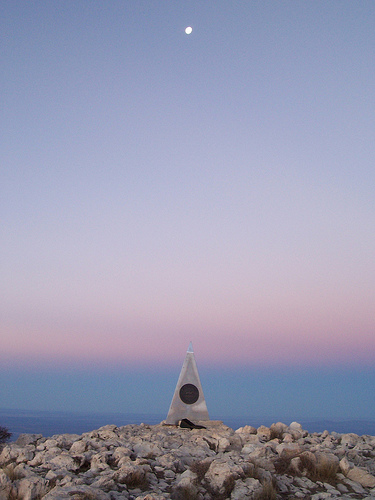 I won the race with the sun, albeit barely. There was enough time to set down my backpack and wander around the top, looking down over... well, Texas, because Guadalupe Peak is the top of Texas. This was different than Emory Peak two days before. For some reason, I wasn't there at Emory Peak as much as I was there on Guadalupe Peak. Something was missing from the experience at Big Bend. I wasn't awake yet. On Guadalupe Peak I had time alone to sit and think and wait, underneath a wool blanket and a fleece jacket and a sweatshirt and that tan button-up shirt which is symbolic of all of my wandering in the desert.

Quietly, the sun rose over Texas.

Quietly -- so quietly I wouldn't recognize it for years -- I woke up.

How did I wake up? What does it even mean? It sounds fanatical, so let me explain.

Simply, it was an increased self-awareness that grew out of that moment. It was a break point. On one side, I could see what was -- what already existed, what was in front of me. On the other side of the break, I began to see what could be instead of just what was. The world gained an extra dimension. On 28 January, there was a mountain and there was a sun. That day I would have been more likely to have seen the top of the mountain in the daylight because, well, because that's how you see things, in the sunlight. On 29 January, I learned to consider different permutations for the same sun and mountain. The mountain peak you see in the dark will be the mountain peak you see in the light, but it requires a perspective shift to take advantage of other things, such as where you go to see it.

Four years later, I'm just starting to understand how to wield this. So I return to Guadalupe Peak in my memory from time to time to see if the lesson has changed, if things are different. These days, the lesson is different because I am trying to understand what I want to accomplish -- the short term, the medium term, the long term. Now, thinking about that morning on Guadalupe Peak, I can think about the future without having to be so linear about it; that is, instead of thinking, "this is where I am, next stop is here, next stop is there," the idea of progressing opens up. Where I am is an extension of where I've been and where I'm going.

I don't understand it all yet. But I'm starting to see. And that's my advantage.

Almost nobody's competent, Paul. It's enough to make you cry to see how bad most people are at their jobs. If you can do a half-assed job of anything, you're a one-eyed man in the kingdom of the blind. 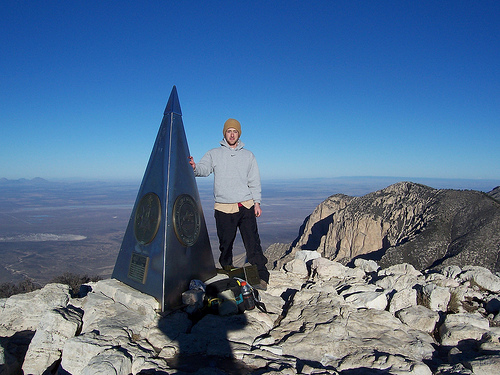 (Also, I returned to Guadalupe Peak in June 2008: Exploring the West Texas Desert: Maps and Photos)