It had to happen someday. Today was that day. Let's all pause for a moment of silence.

I wore a pair of Asolo AFX 535 hiking boots for about ten years and 3000 kilometers. They've been a loyal pair of boots, but they are no longer trailworthy -- haven't been trailworthy for years, really. It was always just "one more hike and then I'll replace them," something I lied to myself for five years. The first time they ever gave me blisters was in July 2009 on their last ride, a 25 kilometer hike to Mt. Webster, Mt. Jackson, and Mt. Eisenhower in New Hampshire. By then the treads were several millimeters shorter, the leather was stretched and cracked, and they were just a tired old pair of boots. They were honorably discharged.

Asolo hasn't made the AFX 535 in years. [cursing] In 2007 on eBay, I found a pair of them in size 8 -- hooray, etc. But when they arrived, I learned that the seller had mislabeled the auction page. What I received was a pair of size 7 AFX 535 for women. [more cursing] This Saturday I reluctantly bought the closest thing, a pair of Asolo TPS 520 GTX. I've taken them on a test hike from the living room to the kitchen and they feel good. I may even take them to get the mail downstairs tomorrow. 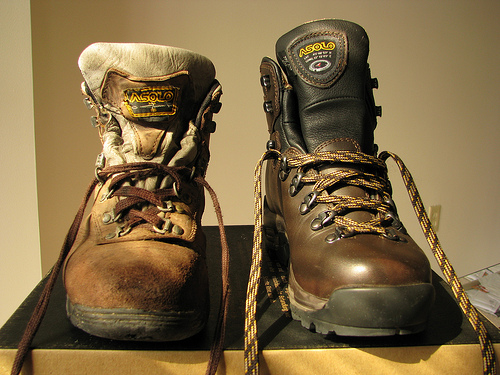 Now I don't know anything about marketing but I'm going to define brand loyalty anyway. Brand loyalty is wearing a pair of boots until rocks the size of grapes can sneak in through the cracks in the side.

And brand loyalty is pointing at a boot on a wall, grunting "Size 8," and stalking out of the store when the salesman is sorry he doesn't have a pair in that size. No I do not want to try a pair of Vasques.

What's next for these new boots? White Mountains. Green Mountains. Whatever color of mountains.

What's next for these old boots? I think I'm going to tie one to a brick with some baling wire and throw it into the Cedar Creek at Beaver Bend in Ingersoll Scout Reservation. I think I'm going to throw the other off the side of Corkscrew Peak in Death Valley National Park. Go ahead and do the same with my ashes when I die. But bring a good pair of boots when you do it: it's a few miles each way to get there.

Gone but not forgotten: 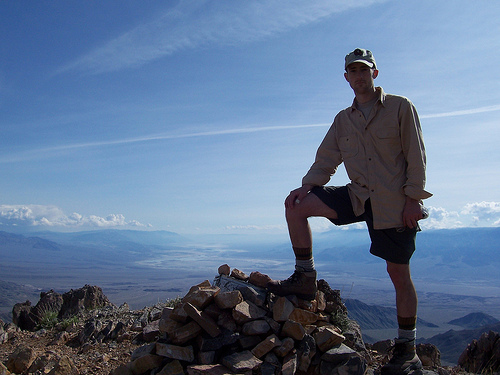