When I first conceived this trip to India, my plan was to explore the burgeoning running scene in India. Today's runners are at the crest of a wave. There will be more runners and more races on India. It's coming. These are the pioneers, and I had to meet them.

Let me admit my conceits at the start. I nurtured a notion that maybe--just a tiny, tiny chance--I could sneak into the winner's circle at the first race, the Panchkula Half Marathon. These Indians just learned how to run, right?

The weather on the morning of the race was better suited for staying in bed under a pile of blankets. That's what the staff of my hotel in Sector 17 of Chandigarh was doing in the lobby. One, under a blanket, sitting in a chair against the wall, lolled his head to the side groggily as I walked by. I wonder if he recognized me. Perhaps he has heard the legend of the White Guy in the Mist.

The mist. The Mist. The mist rolled through the shops of the Sector 17 market. The mist was a canvas for sinister backlit silhouettes as I walked to the bus stand. The mist mocked even the idea of warmth as I jumped down from the still-moving bus--Bus 30, Sector 17 ISBT to Nada Sahib Gurudwara--down the road from North Park Hotel. (If you haven't jumped from a moving bus, you're missing out.) Two-thirds of my time during previous trips to India has been dedicated to sweating. Cold is something new to me here. Ah, but I come from the land of winter snow, so these guys must be suffering, right? Advantage: pale guy.

And then the Army rolled in.

I mean it: the Army rolled into the hotel, twenty of them in matching black track suits with red trim, some with " X-Country 2011" on the back, some with the still-mysterious-to-me "Fourteen." They were strictly business, as Army men should be: clipped hair and mustaches, straight posture, granite composition. In short: lean, mean, running machines.

Now freed from the burden of being the Great White Hope, I settled into my natural role as the Great White Dope. I milled around the start line, saying hello, meeting the runners, finding the good and the not-so-good English speakers. (Oh, my Hindi? Terrible, terrible...)

Yes, OK, so many words and no mention of the race itself... But what the hell? Does anyone but the uppermost tier run for the race itself? Don't we runners--we few, we sweaty few--go out there to suffer our personal challenges in the company of others? Indeed.

So, my American running friends, I am pleased to introduce you to your brothers and sisters over here in India--a wonderful community of runners.

That's what I think Rahul Varghese and the Running and Living crew have done so remarkably, if the Panchkula Half Marathon is any indication. It is one thing to set up a course, time the runners, and give some trinkets to all of the participants, thanks for coming, etc. It is another, in my opinion more difficult, thing to build a community. Congratulations and thanks to the organizers for doing it so well.

The half marathon started exactly on time at 9am. Already I was confused. I was looking for something distinctly Indian about this race--something 180-degrees different than what we do at home. I had expected this race to respect the conventions of IST, i.e., Indian Standard Time, a.k.a., Indian Stretchable time, i.e., late.

No matter. The clock started, and we were off.

The mist refused to quit. The Shivalik Hills were mere meters to our right, but they were an abstract idea, a dark patch only. The sun appeared for a few seconds as a cold, impotent white disk behind the clouds, but then retired until Monday afternoon. I was secretly hoping to be the only white guy in the race but I was more of a purplish color. 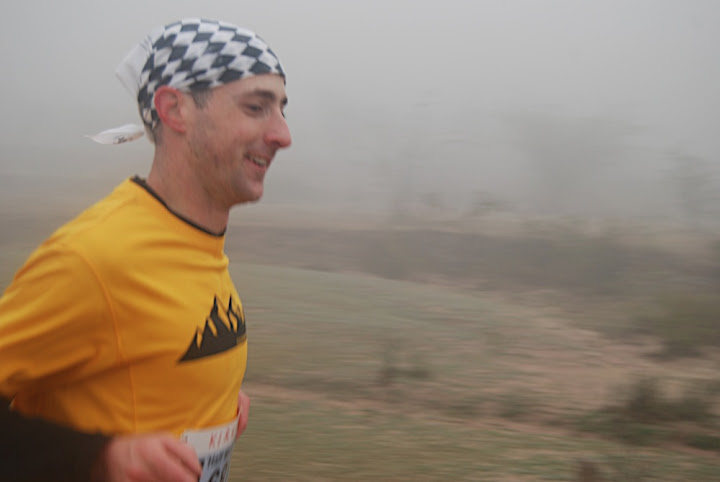 (All photos are from Rahul Varghese of Running and Living.)

Two kilometers down the tarmac, and the runners began to separate. From there it was off the proper road and onto a series of jeep tracks and streambed crossings, past a few small settlements, through a stretch of fist-sized rocks, and puffing down a sandy trail. The rocks were challenging--known as "ankle-breakers" to hikers--but the trail was nice, with plenty of soft stuff. I could hear my knees and ankles say, "Ahhhh."

On we marched through the non-landscape, nothing but a few bushes visible in front of the white curtains, nothing but the occasional buzzing powerlines overhead. Nothing looked different. What gives? The race was organized crisply like a (good) American race. The runners ran like Americans run. Shouldn't something be wildly different? An elephant wandering by? Someone hassling me for a rickshaw?

On and on. The military men in the lead were doubling back on the twice-repeated out-and-back course. I was even getting whipped like this was an American race. 5 km, 6 km, 7 km--now I was feeling better. My skin was less purple, more pink. My legs were finally uncoiling from two weeks without running. Now that I was doubling back on the other runners, I got to see everyone face-to-face. And my impression of the race was sealed: the runners were wonderfully nice.

I was having a hell of a good time--I was running in India, how strange!--and I wasn't alone. Runners called out encouragement to each other. "Good job!" "Awesome, awesome!" "Cool, cool!" "Keep running!" Clapping. Waving hands. Smiling. (And yes, grimaces, but that's running.) So much warmth on a cold day. 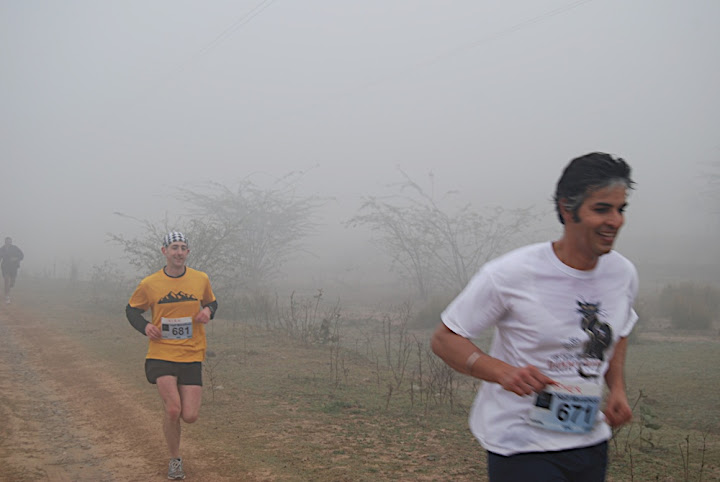 Back to North Park Hotel, the halfway mark--51 minutes and some seconds. There were nine runners in front of me, five of them out of reach. The others? Hmm... tempting, tempting, but I'm here for the experience so no need to chase.

Off for the second loop, past the returning runners to the final turnaround--more pain but also more smiles and more encouragement--and still I had not seen anything demonstrably Indian. A man at one of the water stations asked if I was on my final lap. I told him, "I hope so."

At the final turnaround, the three-quarter mark, I stepped off the course for a moment to inspect some bushes. Returning to the course, I heard some twigs crack behind me. What, hey? I hoped I didn't disturb anyone. But there it was, what I was looking for, that Indian touch to the race emerging from the mist and onto the course like an errant river barge: a water buffalo.

(Now please, all of my American friends, don't mention to my Indian friends here that I grew up in farmland USA, and that I've probably run by more cows than people. That would ruin my point here.)

5 km to go. All of the runners that I could possibly catch are within striking distance. I pass one of them, and then I am passed by someone else. That wasn't in the script. There he went, pulling away, disappearing occasionally in the fog, an apparition on the trail.

What the hell? What kind of experience is it to get beat? Maybe this was the Indian race and the Indian runner that I sought. Maybe the difference didn't need to erupt from the sidelines in a choreographed song-and-dance routine. (I have seen the movies. I know how this works.) Maybe I was looking for something more basic, simply: a race in India.

So I raced in India.

3 km--I reeled him in closer, closer. Four of his friends came in from the side of the road to help pace him home. Indian hip hop music played out loud from their cell phones as I caught the group, which now included one of the runners in front of us.

2km--The roving course ambulance trundled by, threatening to give its driver some extra work to do, pinching us to the left side of the road. As it went by I made a move. The runner in the white shirt followed and led and followed, back-and-forth. 1 km--We passed another runner, the pace accelerating with no end in sight in the mist. How long? How long?

The turnoff emerged from the fog like a water buffalo. Just a few hundred meters to go, and I made a move. This quick move dropped the runner that was going with me but, as I made the turn, the runner that had passed me 5 km ago, came in on the right and left me a few meters behind in the final stretch. Grinning like a fool, I crossed the line after him. 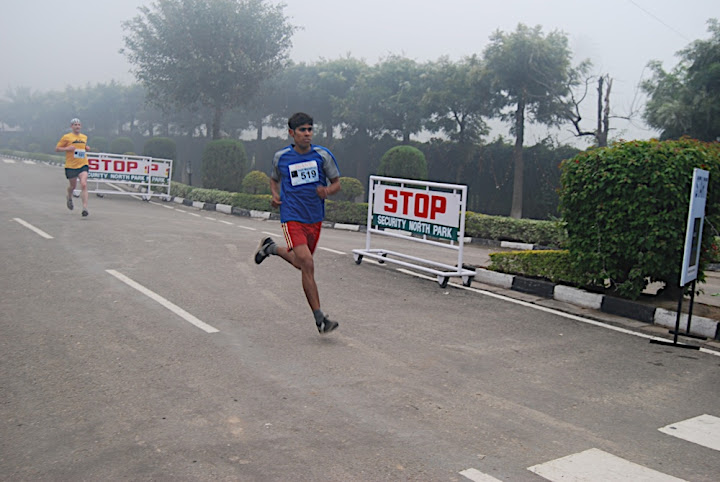 In India, they know how to race.

15 thoughts on “Panchkula Half Marathon 2011: The Panchkula mystery race”