"Not seeing eye to eye on the Vision"

By Phil Rosenfield, article in The Daily Aztec at SDSU

Though it has the tone of a rant, I like the principle of the article. What you have is NASA saying it's the "kids' problem" that they're not interested in what NASA's doing. First, the "kids" are the customer of the public outreach arm and the oft-recruited future workforce; their disinterest is NASA's problem. Second, maybe it's just that the "kids" aren't as interested in the big money programs that NASA needs to sell them/us in order to tell its funders that it deserves more money (at 26 I don't think I'm a kid, but I am in aerospace so relatively speaking...). Instead of explaining what's cool, NASA should listen and learn, and if the agency listened, it would learn that many of the things it does actually are cool, they just don't need to be pressed and packaged but put in view where we can see them. If there's one lesson from YouTube (which I don't use) and Google (which keeps me alive), it's that the community-at-large will find what is interesting and then provide the momentum to make it popular.

Perhaps a disclaimer here: I was born in 1980 and didn't get involved in aerospace because of Shuttle, but because of Voyager. I liked the really big, unknown, abstract things way out there. Someone (that I still respect and ask for advice) once told me that this was the most boring answer to "why are you interested in space?" that she had ever heard. I am not the beacon of what is popularly interesting. Big announcements like the Vision don't interest my cynically hardened interior. That's not to say that I'm against going to the moon. Hell, send me.

Good article, Phil, way to throw one down for the non-space-cadet-but-still-space-interested population. It is OK to lend a disbelieving eye at VSE without being against space exploration.

(like many other interesting current space events that I learn about, I stole this article link from NASA Watch)

Mars Exploration Rover Opportunity will be celebrating its third anniversary on mars next week. Opportunity  landed on 25 January 2004 on Meridiani Planum. To commemorate the anniversary NASA is hosting a photo contest to choose the best Spirit and Opportunity pictures (out of a pre-selected 16 images), then will show the winner on the MER home page on 24 January. 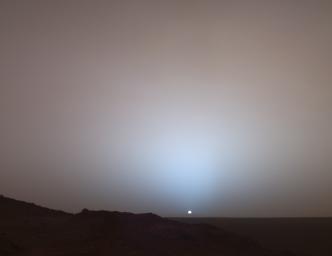 My vote is for Sprit's picture of the Sun setting over the Gusev Crater -- lonely, melancholic, elegant.