One of my most unreasonable traits is that I am apprehensive of staying in touch with people -- friends and family, that is. Want me to fly across the world, meet people in a business setting, and follow-up? No problem. Easy. Want me to send an occasional email to folks I used to hang out with at university or camp? Freeze. It's uncanny. I just can't imagine a scenario in which anyone would want to hear from me. Why would they?

I've been trying to fix this for years, ever since promising to people -- especially my cousin David, who still sends unrequited letters and birthday cards -- I was going to change and keep in touch. That promise was an annual function in university: move to a new apartment, start a new academic year, and promise that this would be the year I'd stay in touch with everyone. Every year was the same.

I'm trying to hack my own brain to get over that apprehension. I can handle goals and lists, and I'm trying to put this bad habit of silence on that same plane.

Two weeks ago, I said: I'll write an email to someone I haven't talked to in a long time every day. I'll send two postcards. I'll send one letter. Buzz! Fail.

Last week I said: I'll write an email to four people I haven't talked to in a long time. I'll send two postcards. I'll send one letter. Buzz! Partial fail. I sent one email and the two postcards.

This week I said: I'll write an email to two people I haven't talked to in a long time. I'll send two postcards and one letter. Ding ding ding. Success: 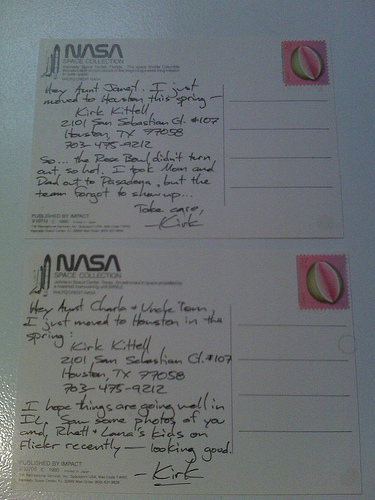 2/2/1 was apparently the right mix to get going.

Sure, this sounds like a minor thing. And you're right. Normal people, I bet, don't have a problem with things like this, but I do. It's boggling -- a clenching of the chest and brain, the desire to seek out anything else to do other than subject other people to hearing from me.

Ironically, one of my outlets for avoiding writing to people I know is to post to Twitter, hence the spate of posting there today while I was writing to others. I mean, the problem isn't writing something to someone. With Twitter, I don't feel the same obligation to connect to each person individually. I use Twitter recreationally, and most posts are meant for entertainment. That behavior mirrors my stage behavior: ask me to make a presentation in front of a group of people that I don't know -- whether it is 10 or 1000 -- and I am unbeatable, entertaining, irreverent, unstoppable; ask me to hold a conversation with one person that I know and I get nervous, I melt.

I don't know what causes the anxiety, but I'm aiming to beat it. If setting goals and hacking my weaknesses by using my strengths works -- great. Smashing. I'll try the same 2/2/1 distribution next week, and we'll see what happens.

Besides, I've been here in Texas since March, and it's about time that I let people know, eh?

Also: postcards are really, really fun to write and send. You should send me your address so I can send you one.

1 thought on “Hacking my fear of staying in touch”