Earlier this year I trained for the Flying Pig Half Marathon in Cincinnati on 2 May 2010. After that I had no particular training goals, so why not go for broke? It's a big leap from there, a 21.1 km race, to 50 km. But here's the trick: it's all in your head. Yes, yes, you have to do the miles in training and stay healthy, but if you keep your focus on the course, you can go farther than you think you can. I know that sounds like a lot of hypermotivationalpositive crap, but 50 km is less intimidating once you've been there.

The 50 km race is two loops around a 25 km course. (The 50 milers got to run a third loop. Big up yourself.) Each loop consists of two smaller sections: the west section is ~17 km, then you pass by the start/finish area over Intervale Road/ME-231 to the east section, which is ~8 km. (Map of the course.) All the while the course rolls up and down, around and around. My Garmin watch tells me each 25 km loop was ~1,000 meters of elevation gain/loss. I don't believe it was that much -- if I stepped in and out of a ditch 100 times, would that count as 100 feet of elevation gain/loss? I don't know. -- but there were plenty of hills.

My goal for the race was to have a good experience. Yes, what a terrible fluffy goal, etc., I know, shut up. But I'm serious: if the first one sucked mightily, there would be no second one. I'm not good at having fun, but I was going to try.

Look, I'm smiling. I'm the guy on the right. I hate smiling in the real world. But here, in a field, 37 km away from laying comfortably in the grass (or six feet under it), I was honestly having a good time. It sounds insane. It may be insane. But it's the method that I've chosen to go insane, so I'm happy with it. It's better than work, where I have to go insane by someone else's rules. (Photo courtesy of Don Penta, Maine Running Photos. He has posted more photos on Flickr. Thanks, Don.) 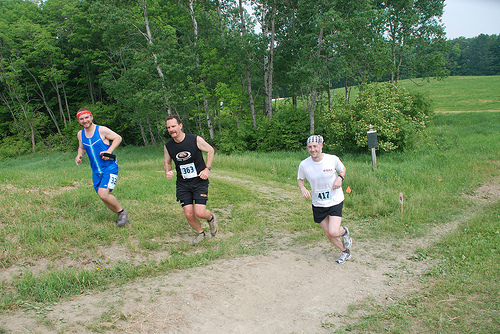 The only real expectation I had for the race was that the gorilla would jump on my back at 32 km. I figured that by then I would have a pair of blown quads with matching blown calf muscles and the rest would be a mind-over-matter slog that would be regarded as the worst thing I had ever done. Why? That's what happened in my two long training runs. (BONK.) My strategy for this was to aim at 37.5 km and hope for the best.

Why 37.5 km? That's the three-quarter mark of the race. In every race I've ever done -- 400 m, 800 m, mile, 5 km, half marathon, and my lone full marathon -- the third quarter of the race is where runners lose their minds. Once you pass the halfway point, the end is far enough away that it is not a tangible thing, you're tired, you're thirsty, you're sore. You run a check on each of your systems and they come back with worrisome data. And you start freaking a little. And you check again. Still no good. Check again. Again. AGAIN. ARGH. I TOLD YOU THIS RACE WAS A MISTAKE, JERKOFF, AND NOW WE'RE IN THE BACK FORTY WITH SIXTEEN MORE MILES TO GO AND I'M NEVER LETTING YOU MAKE ANOTHER DECISION AGAIN.

My lizard brain yells at me in ALL CAPS. He gets excited and scares the rational brain out of the control room. And when he's in charge it's a guaranteed hellride.

Here's the trick. When the third quarter of the race is coming -- in this case, 25 km to 37.5 km -- I know my lizard brain is going to spring out of the corner and sabotage my focus. It happens every time -- and not just to me, I see it in the eyes, the grimaces, the dilapidated gaits of my fellow runners. The third quarter is hard, but I know it's coming so I have a chance to punch it in the face, to defend myself. If I can hold it off until the last quarter, and my rational brain can sense the finish line isn't so far away, I have a chance at a good race.

The advice I got the day before was to walk up the hills so that I wouldn't burn out my legs early, because it would be a long, long day after that. I ignored this advice. I love hills -- going up them, at least. It's partially because it is a slight physical advantage for me -- I like to train on hills, they're my friends. On long runs I use a modified stride on hills that seems to work more efficiently, i.e., it's slower and doesn't kick my ass as much. Mostly I do it as a psychological advantage. To keep moving past walking runners, no matter how slow the pace, makes me feel stronger.

Paradoxically, I find running downhill more difficult. I hurt my hip by pounding down hills last year. Ask Wile E. Coyote: gravity can be a jerk. The strategy I worked out was to run downhill like an idiot -- arms pinwheeling in the air, imagining I was on a rollercoaster. It sounds stupid, it is stupid, but it took my mind off of hating the downhill runs. More importantly, during all of my runs -- uphill or downhill or flat, but especially downhill -- I focus on making every step softly touch the ground. No pounding. No slapping. Every single step: soft. Love your joints. You'll miss them when they're gone.

(There was one guy, earlier in the race, around 20 to 25 km, that would pass me on the downhills, then I would pass him on the uphills. We must have passed each other a dozen times. I offered to trade my downhills for his uphills, and he said OK, but we couldn't work out the logistics. Too bad. I forget his name, but: good luck at the Vermont 100 Mile Endurance Run, whoever you are.)

At the 40 km mark, I finally walked part of the course. (I also stopped for all aid stations, so I wasn't a continuously running for 40 km.) I didn't walk because my legs or lungs were shot. No. I walked because I am an idiot. At three consecutive aid stations, I drank too much water. At 40 km it was either walk or... explosively reintroduce the water to the environment. Note to self: one cup of water at the aid stations, not two or three. (Idiot.)

The really, really tricky part of the course is the smaller, 8 km section. My brain interpreted this as the short, easy section. Wrong. Next time I'll respect this part of the course. I lost my mind in the final 8 km. Things fell apart.

I was invincible. Until I wasn't.

For the next 2 km I was stuck in hell. I was there, watching the proceedings from a point 1000 miles deep in my own head, pushing myself as if through a pool of wet concrete. There were three or four other runners ahead of me, within 50 meters, moving at my pace. When they walked a hill, I walked a hill. Monkey see, monkey do. Maybe I shouldn't have run all those earlier hills, eh?

I'd like to have those 2 km back. It wasn't the fatigue itself, but its sudden arrival that made life hell. I had felt so good in a part of the race where I expected to feel so bad, then, BONK. It took me until the last 1.12 km to fight through the internal confusion. Now that I know what that feels like, it won't be a surprise next time. With better race management I could have beat 4:45. With better training I think I could get 4:15. 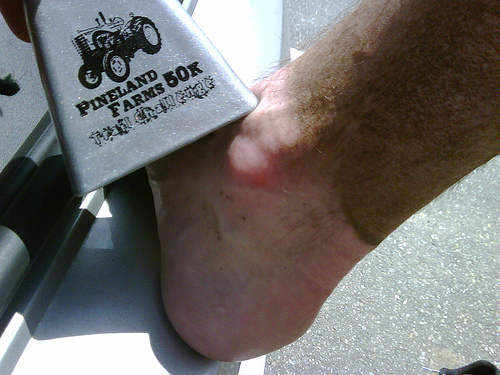