Last Saturday, I took the train down to Boston to catch the Naked Cabaret.

Yes, now I've got your attention...

Some people just never question it

Well, not totally naked, but... Harvard Book Store hosted Chris McDougall, author of one of my favorite books, Born to Run, and a cast of crazy people [1] at the Boston Public Library to talk about barefoot running. These people are nuts--and good thing, too. Normal people aren't interesting to talk about.

I found Born to Run in February 2010. I was interested by the premise: an injured runner asking the question, "How come my foot hurts?" I had just come off a two-month forced running vacation thanks to a stress reaction (not quite a stress fracture) in my right hip. I wanted to know what his answer was. I didn't know about the rest of the story--the ultramarathoners, the barefoot runners, the persistence hunters, and so on. That was an added bonus, and even if you're not interested in running it's a hell of an adventure story. I encourage you to read it. [2]

Barefoot running, or nearly barefoot running... it's strange enough to be its own classification and comes with a list of benefits that can be recited by a group of True Believers. That is to say: it has all the trappings of being a cult. That's why I avoided it. I want no crazy-eyed don't-tolerate-no-disbelief-in-the-One-True-Path fundamentalist insanity of any kind, thank you very much.

But I do get the benefits. What I took from the barefoot sections of the book is that there is a different--better--way to run: softer. I don't do much running without shoes, but I did rescript how I run when I could run again, first concentrating on going ten steps, then twenty steps, then a whole block, then a whole minute without a taking a running step that thumps into the ground. When you get to the point of running softly, running with other people is almost painful when you hear them pounding each step into the pavement. It's no wonder running gets a reputation for destroying knees. Running isn't the problem; people are the problem.

Anyway, I'm not going to get into discussing the pros and cons of barefoot running. There's plenty of information out there. What I'll leave you with is a line from McDougall: "There's this mentality that you must wear shoes, and people just never question it." [3]

Songs in the key of Caballo

Let's get to the reason I started this story before I got carried away. The first and most colorful character in Born to Run is known as Caballo Blanco. He's the one that brings together the 50 mile race in Mexico at the end of the story. As Chris McDougall talked about running as the first art form, he recounted the poignant pre-race speech given by Caballo, a part of the story that I didn't recall because I was anxious to get to the action.

"I remember very vividly the moment when he stood up before the race and gave us our pre-race instructions. If you've ever had a pre-race instruction, it basically tells you where the Porta-Potties are and don't miss that left turn toward the finish line. That's what I expected from Caballo. Instead he gave this summation that was a beautiful expression of what all art is, but particularly this lost art of distance running. He took this bleak thing and turned into something really glorious."

After that, the program took an unexpected turn. Chris invited Brandon Wood, triathlete and opera singer, on stage to give an operatic rendition of Caballo's counsel--maybe a little over the top, but what the hell? Here it is, as recorded by mobile phone. (You might see two audio players here. Ignore that. They're the same. Gotta fix that. There's something wrong with this website (and it's probably me).)

Here is the relevant selection from the book, slightly condensed:

"What are you doing here? You have corn to plant. You have families to take care of. You gringos, you know it can be dangerous down here. No one has to tell the Rarámuri about the danger. One of my friends lost someone he loved, someone who could have been the next great Rarámuri champion. He's suffering, but he's a true friend. So he's here.

"I thought this race would be a disaster, because I thought you'd be too sensible to come. You Americans are supposed to be greedy and selfish, but then I see you acting with a good heart. Acting out of love, doing good things for no reason. You know who does things for no good reason?"

"Yah, right. Crazy people. Más Locos. But one thing about crazy people--they see things other people don't. The government is putting in roads, destroying a lot of our trails. Sometimes Mother Nature wins and wipes them out with floods and rock slides. But you never know. You never know if we'll get a chance like this again. Tomorrow will be one of the greatest races of all time, and you know who's going to see it? Only crazy people. Only you Más Locos.

"Tomorrow, you'll see what crazy people see. The gun fires at daybreak, because we've got a lot of running to do."

And now for something completely different

I pulled this off a bottle of #9 while I was writing this, and it seemed to fit the theme: 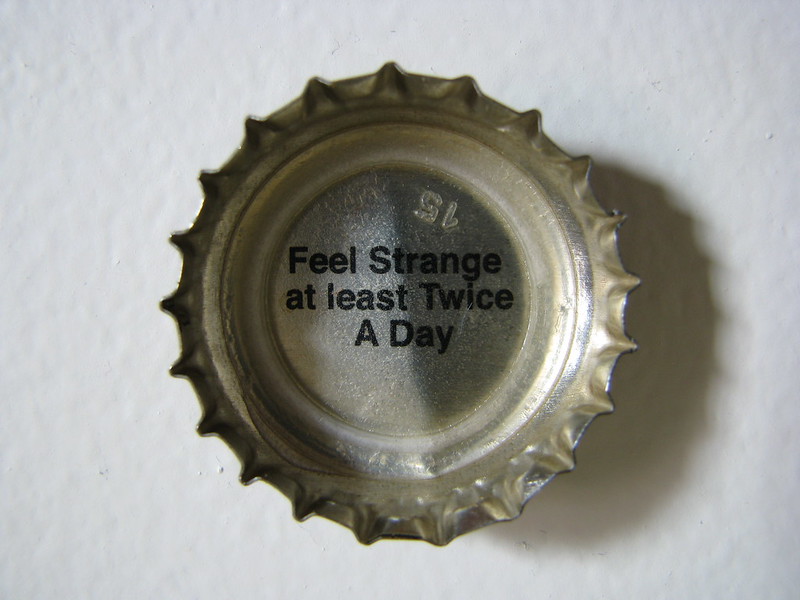 Perhaps ironically, after running three marathons and three half marathons in India in the first quarter of the year I'm just now getting back into shape. Here's where I think I'll be racing this year as of... now:

1 thought on “Crazy People at the Naked Cabaret”