/drops self out of gear, lets self roll...

Sometimes, when I'm looking for houses to buy on Redfin, I get caught up following the old railroad paths that aren't there anymore. They're obvious if you know what to look for. In Redfin they're more obvious because there exist in some places a long continuous gap in the property lines. In the satellite view you can see long curving paths that are matched along their curve by parking lots, unusually shaped property lines, and, if you drive through the area, a clear fit along a graded path.

I see these patterns whether I look for them or not.

The gully across the street in St. David was an old railroad spur (or was it a continuous line?) down to the mines from the main line along IL-100. In our backyard in Lewistown was an old line that would have come out of the mines in the direction of Depler Springs into Lewistown, not long past an old junction that would have crossed Main Street going east, its scar visible beyond the outfield of Higgins Field—the outfield of Higgins Field itself bearing the scar of the old track before it was moved a bit north and west.

In St. David there was that weird sidewalk through the woods that connected Fulton Avenue to Central Avenue that only makes sense, I suppose, in the context of the mines that you can't see. Same, I suppose, with the trails—Fred's Woods, Dave's Woods—where we rode our bikes.

And along US-24, on the north side, are the remains, if you look the right way, of either the predecessor of US-24 or a parallel rail line.

I'm not planning to bring this post towards a point. It'll roll to a stop when it gets there. Not going to give you any maps either. Find the long loping curves and the displaced grades yourself if the spirit moves you.

When I lived in Newman, in Douglas County, driving north through Broadlands to get back to campus, you could see the remains of a line that would have gone from Villa Grove to Westville. 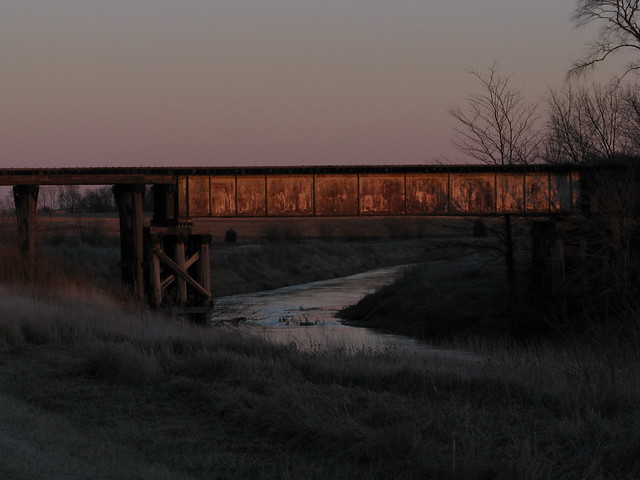 At the Spoon River crossing by IL-116 west of London Mills, on the west side of the current highway are the remains of the old highway bridge over the river. And on the east side there were pylons of an older bridge. I assumed it was also a road bridge. Once in Google Earth I pulled up historical imagery and it was a railroad bridge, the railroad feeding out of the old mines through London Mills and up into flat country.

I can't believe you're still here.

Go upriver of that crossing, past the junction where the Spoon meets the Cedar Creek, until it crosses under Fulton County Road 20—Indian Ford Bridge, formerly one of the old metal highway bridges of Fulton County.

Cedar Creek is the southern boundary of Ingersoll Scout Reservation, where I spent several years camping and several years working. ISR was patched together from old farms and if you knew where to look—and it wasn't really looking so much as walking through the woods and the stinging nettles feeling for clues—you could find the remains of old barns, old buildings, old electrical boxes where a house might have stood on the old County Line Road that had been submerged by the manmade Lake Roberts in the 1970s. If you could feel the old overgrown fields, you could find the old barbed wire that had been taken off the old fenceposts and rolled up where an old tree also used as a fencepost had consumed it.

Old trails. They're not even history because history is written down. Old trails are an enigma, living forever until found by strange wanderers or destroyed forever as they're subsumed by development. In the final accounting it probably doesn't matter which.

Earlier this week I learned about the Old Indian Trail from Cadillac to Traverse, Michigan. And I also found this article in The Guardian about how the shape of Chicago and its surrounding areas are built to the shape of old native trails: Native American routes: the ancient trails hidden in Chicago’s grid system.

And that played on something in my mind that I've meant to look up for a long time: in my internal movie of Lewis and Clark traveling from the Mississippi River to the Pacific Ocean, I have an image of people traveling in canoes up and down rivers, and hacking through temperate jungles, passing through unseen land, occasionally popping into a clearing where there were strange people just hanging out around a campfire, and then moving on through the jungle. I don't think that's how it went, but that's the baseline mental image. Obviously they would have followed trails instead of bushwhacking. No one would get all the way to Oregon just by stumbling through the undergrowth. What trails did they follow? What old trails are still there?