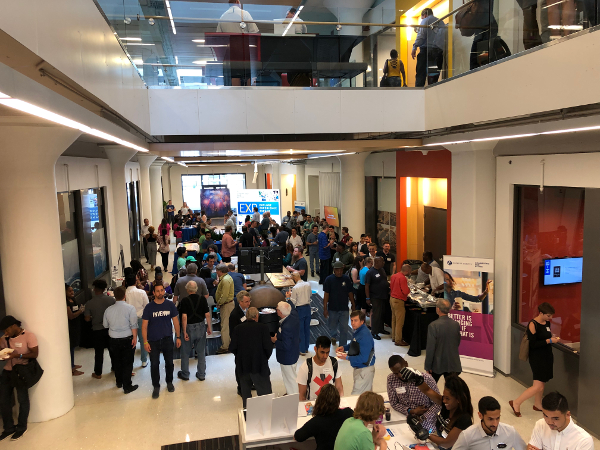 —David Mindell, "Chapter 2: Chauffeurs and Airmen in the Age of Systems", Digital Apollo: Human and Machine in Spaceflight (2008) (notes)

A few weeks ago, the INCOSE Midwest Gateway Chapter (the local professional society for systems engineers) hosted an event called Agile in Systems Engineering. Basically, I begged one of our directors, Adeel, and one of our best members, Matt, to explain to systems engineers what the hell agile development is. Whether it's a fad or not doesn't matter. If you're going to be exposed to it, you should know more about it. Even if it is a fad, you should steal the good parts mercilessly and incorporate it in your repertoire.

Systems engineering and agile development (agile software development, at least) are fundamentally opposed. We're not supposed to say that out loud, but it's true. Systems engineering is largely a top-down decomposition from what a customer wants to how a system should satisfy that to how subsystems should support the system, and so on. It's about definition and control from the top. Agile is more about bottom-up. Develop the system by developing the system—develop the system (software) by doing it, and respond to changes as they come.

I am living in capital-P Pain.

The purpose of my life at work right now, as a systems engineer in an organization that wants to pursue agile software development in an environment of top-down control, is to serve as a kind of buffer. On one hand, I'm trying to be a buffer to block the software developers—the people actually doing the work—from the vagaries of the people who own the project schedule. (See also: Shield.) Agile is, in very rough terms, about establishing a backlog of work that needs to be done for a project, and then selecting the most important bits of it that can be done in a sprint (two- or three-weeks). As the people up high want to shift the schedule, they lose patience with the priority of the backlog and the sprint, and they (naturally) want to adjust it. But that's not allowed. Make a plan and stick to it.

So a lot of working as a systems engineer in an agile environment—an agile environment in a large organization used to top-down control, at least—is about acting as a translator between two fundamentally opposed paradigms. It's thankless work of questionable utility. It takes a lot of time and effort to translate schedules and still, at the end of the day, some joker will come up and ask you: why aren't your requirements done yet?

So I'm thinking to submit an abstract to the 2019 INCOSE Great Lakes Regional Conference (call for submissions to talk about this. Many people, in my opinion, spend their time in top-down or bottom-up jobs, so maybe it's time for somebody to provide some kind of Rosetta Stone to link the two together. At the very least, it might cause me to crystallize some things I do in my day-to-day work. Stay tuned, etc.

I found this book while searching for more information about the Apollo Guidance Computer in preparation for a talk (see: Landing on the moon: three visions attained). Fortunately for me, the nearest St. Louis County Library branch to work had a copy.

I had assumed the book was just about the computer itself, which was why I got it, but at ~80 pages in, it really hasn't been covered except by reference. Instead, what the book has covered is something that I recognize from developing flight controls back at Mason, and to some extent in systems engineering in my current position: the tension between the human pilot and the automatic pilot (and by extension its designers). It's an inevitable tension—in simplistic ego terms, the fight between controlling and being controlled. In more sympathetic terms: it takes more than equations to design and more than human experience to fly a sufficiently complex aircraft.

So: straight ahead, learning more about X-15, etc., until I get to the parts about the AGC and flight software that I wanted to learn more about. In the meantime, the book has also been the source of some interesting citations:

[p. 73] In those days, airplanes were unreliable and I thought they might become more so. I never flew without a pair of pliers, a screwdriver, and a crescent wrench in pocket so I could fix things on the airplane. This was being a mechanic, not an engineer. I had applied for the Engineering School because I thought there should be a better rapport between the aeronautical engineer and the pilot. It seemed to me that the engineers felt pilots were all a little crazy or else they wouldn't be pilots. The pilots felt the engineers as a group were, if not incompetent, at least not thoroughly acquainted with the pilot's viewpoint—that all the engineers did was zip slide rules back and forth and come out with erroneous results and bad aircraft. I thought from a philosophical point of view that it would be good to have engineers and pilots understand one another better. It seemed desirable to marry these two capabilities in one person—and I wanted to be that person.

—General Jimmy Doolittle, I Could Never Be So Lucky Again: An Autobiography (1991)

To train the pilots for the X-15 landing phase, several methods were considered. First, an analog computer was used with an oscilloscope presentation to indicate approach attitude. This gave the pilots and engineers an understanding of the relative importance of the factors affecting the landing flare, but definitely lacked the in-flight realism afforded by the rapid approach of the ground.

Naturally, when faced with the opportunity to dig into the Apollo program, I came back to this book, which I haven't read since... sometime in college, I don't even know when. Whenever anyone asks about a good systems engineering book, this is the one that I suggest—it's just a wonderful design effort to meet a set of gnarly and shifting mission requirements in a previously untried environment. It would have been an incredible opportunity to be on that program. Just... amazing.

[p. 51] I had the aerospace engineer's dream job of the century. Not only would I design and build the first spaceship to land men on another heavenly body, but I was encouraged by NASA to let my imagination run wild and question everything we and they had done in prior studies and the LM proposal. I could start fresh, with a clean sheet of paper, using our past work as a point of departure. Such freedom!

What I remember liking about this book is that the program it covers, the development of the Lunar Module at Grumman in the 1960s, is not at all smooth. Things are late, things don't work, things break, the customer changes their mind, etc. It's all stuff we have to deal with today, sure, but the stakes were really high and public, and the mission was literally and figuratively out there.

I don't often re-read books, but I'm really looking forward to reading this one again.

Bonus: here are some papers by Tom Kelly that discuss the history of the Lunar Module.

A follow-up to: Systems engineering and Apollo

The trouble of talking about the Apollo program, without resorting to tropes—redacted comments about how the same people who brag about being able to design things to land on the moon when they were in their 20s with no experience whatsoever are the same people who require you to go through twelve reviews to publish a test plan that they still have veto authority over if it passes—is that there are still a million things to cover.

I think that if I do go ahead and give this talk in July that I would focus on the landing. I got some interesting feedback about mission design and about the Saturn V rocket, but it's still the landing that most captures my imagination. My parents gave me a copy of Tom Kelly's Moon Lander: How We Developed the Apollo Lunar Module (2001) (notes) sometime when I was in college, and I still offer that book as an example when people ask for a book about systems engineering. The book even mentions systems engineering by name, which I didn't realize until I was reading through it again (I wouldn't have known what that meant in college anyway, though that matches fairly closely what I was doing on projects, etc).

"Three visions attained". That idea is ripped off from an interesting New York Times Magazine article about Robert Moser Neal, Frank Lloyd Wright, and Alex Jordan Jr: "Wisconsin: Three Visions Attained" (1993-03-07). It's a good article—read it. I like it because (1) I lived in the Driftless Area for a while, (2) The House on the Rock is one of my proto-memories from summer vacations while growing up, and (3) for reasons I don't understand Frank Lloyd Wright is a Midwesterner who is To Be Revered As A God. Just read it.

I don't even care if I give a talk or not. Just thinking about it, and organizing my thoughts, is a kind of love letter to the idea of space travel that has more-or-less been shelved. So be it.

But: landing on the moon. What would the three visions be?

The second one also presents itself: John Houbolt, the chief instigator of the Lunar Orbit Rendezvous mission mode of landing on the moon.

And the third one? Open.

The temptation is to dig deep into something esoteric. Space suits. Display panels. Apollo Lunar Surface Experiments Package (ALSEP). Software... bingo. Maybe it's a good place to talk about Margaret Mitchell and the flight software on the Apollo Guidance Computer.

So if you want to throw a party to celebrate Apollo, the time is now.

I wasn't thinking of the anniversary myself. I got a note from the NASA JPL Education Office email list (join) about using the anniversary to teach kids about the moon (Celebrate the 50th Anniversary of NASA's Apollo Moon Landing with Educational Resources and Projects for Kids). And we were looking for something to do for our local systems engineering professional society, INCOSE, anyway. So I opened my big mouth and volunteered to give a talk about Apollo and systems engineering.

I don't know exactly what I'll talk about. There's too much to talk about. Project Apollo was an enormous engineering project with many, many different subprojects and systems and interfaces and so on—an enormous number of starting points from which to explain the project in terms of systems engineering, so it's hard to limit myself to just a few. Also, I haven't thought about spacecraft of any kind in years, having nudged myself out of an orbit where I got to work on space projects into, well, several orbits that don't, so my understanding of the concepts involved are a little rusty.

Anyway—problems and opportunities. Learn something, teach something. Get excited by something, throw a big party.

I know vaguely what the format will be. I want to pick three or four topics or episodes or players and present them as vignettes. Instead of trying to paint the entire picture of systems engineering in Apollo, I want to paint just a few bits in detail and give a map to the audience to find the rest. Here are a few interesting topics that I think I can be explained, in too much detail, in systems terms:

That's a short list, but each topic quickly goes fractal and then there's too much. So access to materials and finding unusual angles will determine which few things to talk about.

In the meantime, as I'm tracking down references, I'll add a page here to collect it: /ref/apollo.