Given the choice—and time, lots and lots of time—I tend to fall back on hand tools for doing work. I have power tools like drills, saws, grinders, etc., but they're only the first choice when they're the clear choice, and I've only bought them after working my way up from other tools.

In the backyard I'm using a spade to break up the dirt where I'm going to plant the tomatoes. This is the same area where we planted them last year, however, this area has been compressed quite a bit because this is where I was storing the crushed limestone base for the retaining wall and several pallets of retaining wall blocks. (Another recent manual job: moving the rock six or seven meters to the south.) The area isn't that big—maybe it's five meters by eight meters or so—but it took several hours to break up. Some of it is clay that hasn't been broken up since the house was built in the 1960s, some of it is clay that was broken up last year for the garden, but wasn't necessarily broken up to the whole depth of the spade head.

Maybe next year I'll use a power tiller. I'm tired. I still have one more small area to turn over tomorrow. I don't know. After that, maybe even the tiller won't be enough. Maybe I'll just accept that dirt is sacred and it is where it should be.

Manual tools are an atavistic impulse. There are better—faster, at least—ways of doing work. But hand tools have a better... feel.

It's too dark to get a good photo now, but there is one section of the backyard retaining wall that shows an evolution from hand tools to power tools. There is a right angle where the wall under the steps intersects the wall the runs parallel to the deck. At the bottom, the joint is rough, the block cut with a hammer and chisel only. Then it gets a little better going up—an angle grinder purchased to make the work better (faster). Then it gets better after I got the Skilsaw.

Then it gets even better once I used the Skilsaw to make the straight cut, and used the hammer and chisel to modify the straight cut to fit the rough edge of the cut face of the block that it mated to. Perhaps that's the final evolution: a mixture of manual tools and power tools selected for what they do best, for what they're needed for.

A memory from the past: watching Peter Follansbee working on 17th century furniture reproduction in Plymouth, Massachusetts in 2009: 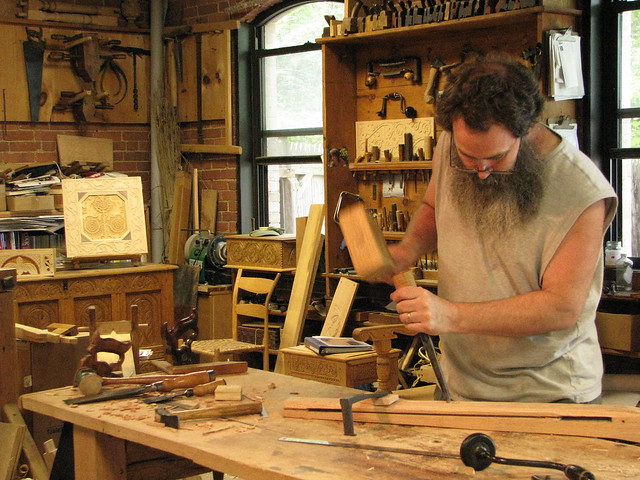