All good strings must come to an end.

I'm at the stage where the few trail or road race shirts that I have are coming to the end of their own race. Today, the venerable yellow shirt from the 2010 Escarpment Trail Run gave up more thread from the seams than I thought a shirt could have. I don't know how that arm is staying on, but it's only one of several injuries that the shirt has sustained over time—this is merely the first one that had structural implications. The long scuff mark from washing the shirt in Mumbai is there, as are some scratches on the shoulder from eating some rocks on a trail near Malibu.

And so on. A history of a shirt isn't interesting. A shirt is a rag, and a history should have some consequence, else it's just an anecdote.

These running shirts, though, as they fray into rags, are apt metaphors for the capacity and training that were there when they were first acquired. The ETR is possibly the hardest race I ever ran, though it was only a 30 km run—up down up down up down up down viciously through the Catskills. You could bury me halfway up Windham High Peak if I tried it today. I would fray harder than any shirt ever could.

Shirts are things. Things break. Experiences don't break. In fact, experiences become larger over time as we embellish them, inflating the good and forgetting the bad, where possible. It's only Right. Ask me what I remember about that race. Not so much, eleven years later. I remember part of the walk up—run, ha, sometimes the uphills are insidious and some require all hands and feet—and I remember some of the lookouts up high, and I remember coming down from Stoppel Point and needing to slow down and walk part of the downhill because I was so tired that I couldn't process the trail fast enough to run it anymore. It must have been a tough race that year because not even Ben Nephew broke 3 hours when he won.

A shirt is just a shirt. I know its color and size and the mountain image on the front. I don't remember the conversations there at the tent at the end of the race, nor the specific people I met, or any detail that doesn't vanish when the mind's eye scans over the fuzzy image called up from deep storage. And there is a fuzzy image there—something that has the shapes and the colors and the sun and the humidity and the picnic tables and the food. And there is the drive across the long width of Massachusetts, a place of small mill towns locked in amber. And there is, as ever, the ready crowd ready to start the race.

A shirt is just something that is cast into oblivion at the end. Our memories are the same, I suppose, and the threads come out of them and the fabric gets thin, and eventually it also gets cast into oblivion with all its fuzzy images and its meaningless/meaningful anecdotes.

The Escarpment Trail Run is a 30 km race up and down a hiking trail in the Catskill Mountains in New York. Two hundred people are allowed to enter after going through an application process that begs them not to. (Bears! Bees! Broken bones! Bruises!) There are casualties. There is pain. 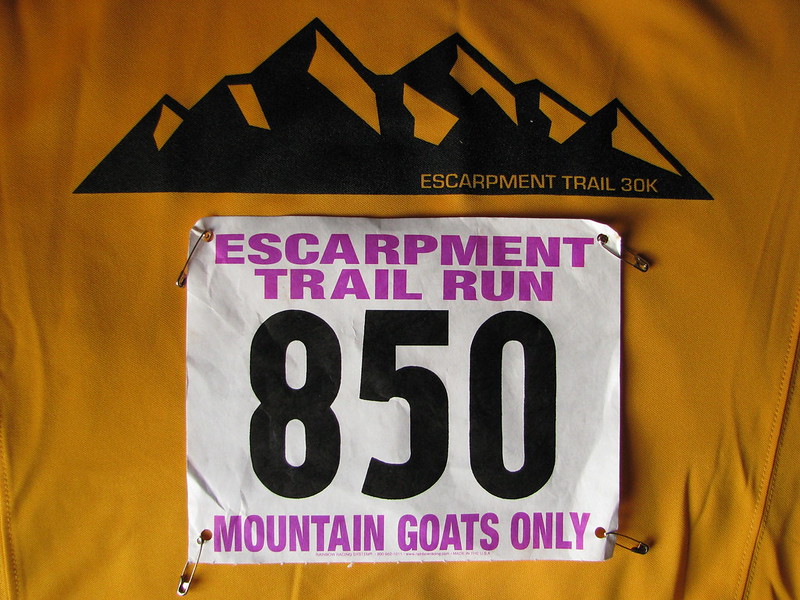 It was awesome. There are no medals for participating. There are no t-shirts handed out (the one above was purchased). There are no awards for winners. This is the essence of sport and it's often hard to find in an organized event. Thank you, Dick Vincent, for putting it together. That's my kind of race.

Who is crazier than the 200 runners in the field? The volunteers. Sure, we ran up the mountains, but these guys started early and backpacked the water and other supplies to each of the three peaks and several places in between. And they were nice, too. Had I been a volunteer, I would have been a rotten, surly bastard from the hike.

So, thank you all. I don't know why you do it but I know a good therapist if you need one.

Listen: I am not a trail runner. I posed as one to get in the race. Trail running is a different beast. To run the trails is to dance with the obstacles on the trail. Misjudge a step, face the consequences.

You may never see a trail runner in the wild. If you do, remain calm. Don't make any sudden movements. They only want to get past you because you are standing between them and the beer and medical supplies at the end of the trail.

The race is run on a hiking trail. At the start, two hundred people funnel immediately into a single file line and start up -- literally and immediately: up -- the trail to Windham High Peak. I wound up in the back half of this line. That's OK. I expected a rough day and wanted to start slow to avoid crashing utterly at the end.

The first part of the run is a walk as everyone gets sorted out. Some people like to do the running-in-place-at-a-stoplight thing when the going is slow. I prefer to do the Terminator Walk. It's more menacing. And on it goes, nose to butt, for a kilometer or so, then I started moving forward through the pack.

The trouble is that it is a single-wide trail, so passing is treacherous. Fortunately trail runners communicate well. If you ask to pass they'll let you by, or when they hear you coming, they offer to let you pass. When you pass or get passed there is also some good natured banter. "Let me know when you want to pass." "Not yet, I'm dying." "Not if I die first." Et cetera. It takes that kind of system to make the race work. If you don't take the race seriously enough, you crash and burn. If you take the race too seriously, you crash and burn. But there is a sweet spot in the middle where you crash and enjoy it.

On and on, up and up, to Windham High Peak, where volunteers were at the ready with Gatorade and water and cookies. Saints, all of them.

After Windham High Peak, there was this guy. He was amazing -- utterly amazing. I shall refer to him now as The Cannonball. Why? He boomed down the mountain like a cannonball. If he had run off the trail and hit a tree he would have smashed the damned thing into boards and toothpicks. But he didn't. Also, to move at that speed, over boulders and trees and around corners, let's just say that he has certain anatomical features that are the size and composition of cannonballs. Ahem.

The tagline for the Escarpment Trail Run is "mountain goats only." I am not a mountain goat. I was in awe of these guys giving themselves to the downhill trails in ways that could only result in brutal armbreaking falls for non-trail runners. Like me. Sometimes I would try to follow just to see what it was like to move so gracefully on the edge of catastrophe but I always backed off and waited for the flat and uphill sections. I couldn't hack the downhills like the pros.

There are three types of uphills on the course. There are some sections that I could run. There are some sections that were a little too steep to run without burning out my legs, so I would use my Terminator Walk. Then, on Blackhead Mountain there is a third kind: climbing. Hands and feet. Go up and look at that elevation profile again. The bump in the middle is Blackhead. Sure, the application said there would be hand-over-fist climbing. But. I didn't think it would be "hand-over-fist climbing," per se. Somewhere in the Catskill Mountains I could hear Dick Vincent cackling madly.

On the way down from Blackhead, one of the other runners who had not died in previous Escarpment runs offered me some key advice. He explained the approach to the third and final peak, Stoppel Point, in terms I could understand. He said that if I knew what was coming, I could make it to the top without crying. Under normal circumstances I would have been indignant and intentionally ignored his advice. Crying? No, sir, I am A Man. Here, though, I hung on his every word. Besides, I was very nearly crying already, so what the hell.

The advice was simple. He said the final ascent had three distinct steps, i.e., up, level, up, level, up. If you didn't know that, you might get over the first or second, winded and tired but satisfied that you had beat the mountain, only to be mentally ambushed by another ascent. Commence tears.

That was helpful advice. And he said once you made it to the top -- which is distinctly marked by an airplane crash site, with the airplane right there by the trail -- that you were home free, nothing but down, down, down.

What great news. I pictured an easy glide down the Champs-Élysées, drinking champagne, smiling with the other runners, etc. Looks like we made it after all, etc.

The end was the most technical part of the race. And at this point my brain was shot. Of course everyone is physically tired, but it was the mental tiredness that I was not prepared for. For three hours I had been concentrating on the trail three feet in front of me, picking a broken-ankle-free path over the rocks.

How hard was I concentrating? For the first time in my running career, I did not have any music playing in my head, nothing to hum to, nothing to set the rhythm of my pace to, nothing to retreat to when the going got tough. Nothing. Nothing but weird, ominous silence.

The final downhill was treachery. Maybe it's my feverish memory of this part of the race, but the rocks seemed bigger, farther spaced. There were more technical sections, i.e., more climbing on hands and feet and butts.

All of these stimuli -- where to step, how to step, what to avoid, what to jump -- were being fed into a brain completely demented by the previous three hours. Sometimes I would walk stretches of downhill when I realized that I was descending more by luck than intent, bounding down boulders that I wasn't even seeing because my brain was not processing the visual information at the same rate it was being acquired.

And then you pop out of the woods and it's over. My goal was to finish under four hours but I fell apart in the final descent. I placed 32nd with a time of 4:09:00. And then we jumped in the lake to cool off.

What a disappointment to go so far and miss, although I am grateful for the chance to be part of the club of Escarpment Trail Run finishers. Does this mean I'll be back next year to break four hours? Does a trail runner crap in the woods?

Other race reports and photos from the 2010 Escarpment Trail Run: